This page introduces Practice Competence & Excellence (PCE), the second of the four dimensions of the professional practice model (PPM). You'll find most of the eight main ideas of this dimension to be familiar because we already think about them as we provide clinical care for patients; you'll notice that they're similar to the nursing process ideas but are put into action with renewed meaning and in greater depth.

As you read this page, reflect on the four main purposes of PCE and how well they fit with your current practice.

Take some time to reflect on the second illustration below. It introduces you to the eight main ideas of PCE and how they relate to one another. Notice that the eight ideas fall naturally into three groups: 1) the first two ideas concern nurses' manner of practice, 2) the central four ideas concern nurses' critical circle of clinical responsibility, 3) the two final ideas support nurses in their clinical responsibilities.

You'll also be introduced to the additional ideas of 1) using standardised nursing languages to define and specify nursing practice, and 2) using collaborative problems in your collaboration with other health professions.

The Practice Competence and Excellence (PCE) dimension focuses on the attitudes and activities that comprise our direct clinical care of sick, injured or vulnerable people. It emphasises the objective, procedural aspects of nursing practice which are carried out at least with competence and always with the intent of developing excellence.

The PCE dimension is broadly similar to the widely recognised nursing process but its concepts are understood and implemented with renewed meaning and in greater depth. Most of its concepts emphasise the outward life or bio-physical reality of body and senses, but its concepts also encompass the inward life of mind and spirit as they are directly related to skilled clinical practice.

In the following diagram of Careful Nursing, PCE is shown in the blue coloured section which is emphasised. 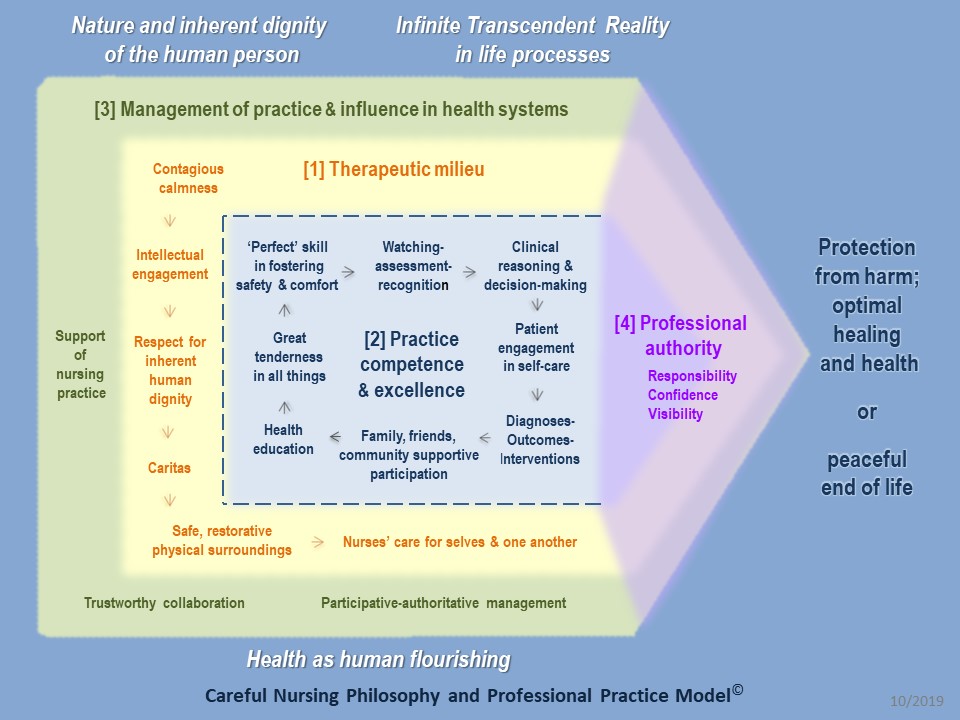 Analysis of the historical documents from which Careful Nursing was constructed revealed that most content described the nurses' direct care of sick, injured and vulnerable people in hospitals and communities. The data strongly suggested competence as the best descriptor of their clinical practice because they assessed patients' needs and their personal, social and economic situations comprehensively; were organized, innovative, clear and confident about the care to be provided; were invariably calm, kind and patient in manner; were adroit at managing the community and organizational circumstances in which they were practicing; and were able to adjust quickly and appropriately to sudden changes and emergency situations.

The 19th century nurses were widely respected for their nursing practice ability, even by people who were very opposed to their culture and spiritual beliefs. The historical data also suggested that the nurses' ultimate practice aspiration was excellence. They viewed excellence as using their knowledge and ingenuity to create the very best possible overall circumstances to promote patient safety and healing. Ultimately, excellence included fostering and recognising moments of transcendent love, peace and joy that could emerge for patients in the flow of human healing relationships.

Literature on competence indicates that there are different views on the nature of competence (Fernandez et al. 2012) and suggests that competence and excellence relate to one another on a continuum that can move in either direction. A nurse's position on this continuum may be influenced by a range of personal and situational factors. We know the experience and satisfaction of being close to excellence but we also have times when we are more in the area of competence. Nonetheless we all aspire together and help one another to practice with excellence.

The purpose of PCE is four-fold:

♦ support and strengthen nurses control over their practice and practice surroundings

The PCE dimension is defined operationally by its eight concepts which fall loosely into three groups, as shown in the Figure below. 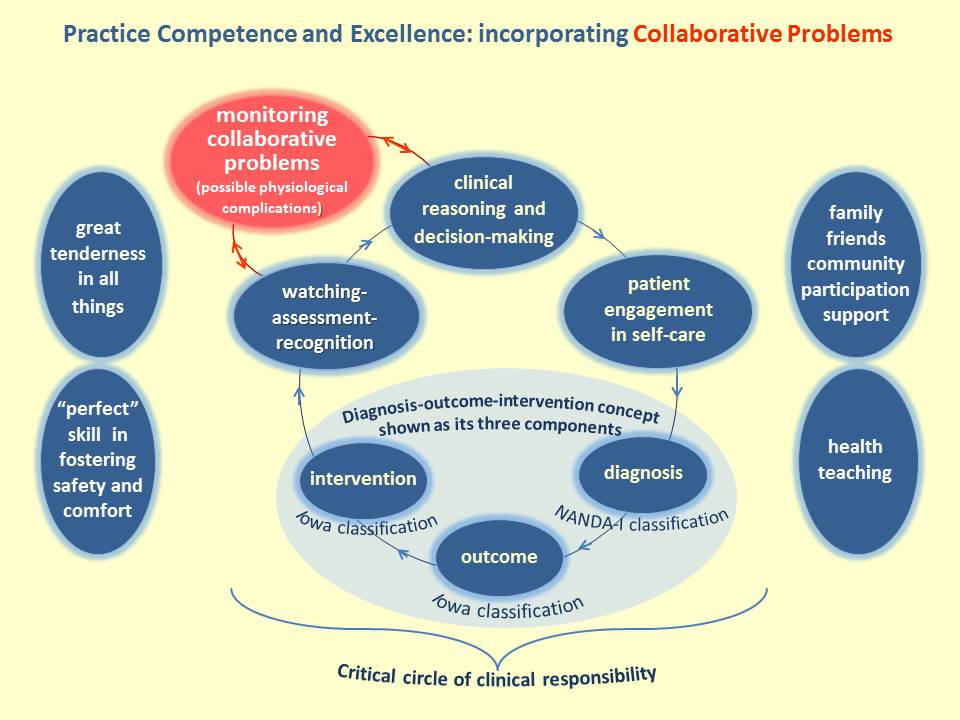 To the left of the Figure, Great tenderness in all things and "Perfect" skill in fostering safety and comfort provide the underlying context for implementation of the additional six concepts.

To the right of the Figure, family-friends-community supportive participation and health education support the critical circle of clinical responsibility concepts.

A prominent feature of PCE is the incorporation of the standardised nursing languages of NANDA-I nursing diagnosis (Herdman & Kamitsuru 2018), the Nursing Outcomes Classification (Moorhead et al. 2018), and Nursing Interventions Classification (Butcher et al. 2018). These languages, shown in the Figure above, provide nurses with the ability to name and measure their distinctive practice responsibilities, that is, to diagnose and treat undesirable human responses or susceptibility to such responses to health (illness) conditions or life processes and, in addition, to make health promotion diagnoses.

The Figure below shows how nurses take their place in the multidisciplinary team with confidence and engage in collaborative practice with other healthcare disciplines. Each discipline's contribution to patient care is recognised and respected.