Also highlighted is Careful Nursing's focus on ourselves as nurses, on how important it is that we also care for ourselves and one another - and always seek to maintain and strengthen our ability to control our practice and practice surroundings.

Two diagrams show the key ideas in Careful Nursing. Both diagrams show the same ideas but in different formats. You won't see a patient in these diagrams because they show what nurses think about and do to take care of patients.

You will meet up with the idea of philosophy in nursing and you must promise not to switch off at sight of this idea.

Philosophy is like a big colourful ball of ideas that bounces through time, from the ancient world to the present, developing ideas and points of view, arguing with itself, and coming up with all sorts of proposals about the nature of human beings, communities, societies and the universe.

You will read a "discussion" between Careful Nursing and philosophy that illustrates how the two work together to achieve the best possible practical thinking and doing in Careful Nursing.

This page ends with some points about how Careful Nursing helps build up nursing knowledge.

What is Careful Nursing ?

The Careful Nursing Philosophy and Professional Practice Model© (Careful Nursing) (Meehan et al, 2018; Murphy et al 2018; Meehan 2012) is a unitary system of thinking and acting for the purposes of 1) protecting sick, injured and vulnerable people from harm and fostering their healing and health and 2) strengthening and supporting nurses in their practice and in their control over their practice and practice surroundings.

Careful Nursing is grounded on the premise that the nursing profession, as the term 'nurse' indicates, is a distinctively nurturing, relational profession concerned with protecting people from harm and fostering their healing and health (and sometimes a peaceful, natural end of life), within the context of nurse-patient relationships.

Careful Nursing is structured according to three philosophical principles, four practice dimensions and their total of twenty concepts, shown in the following two Figures: 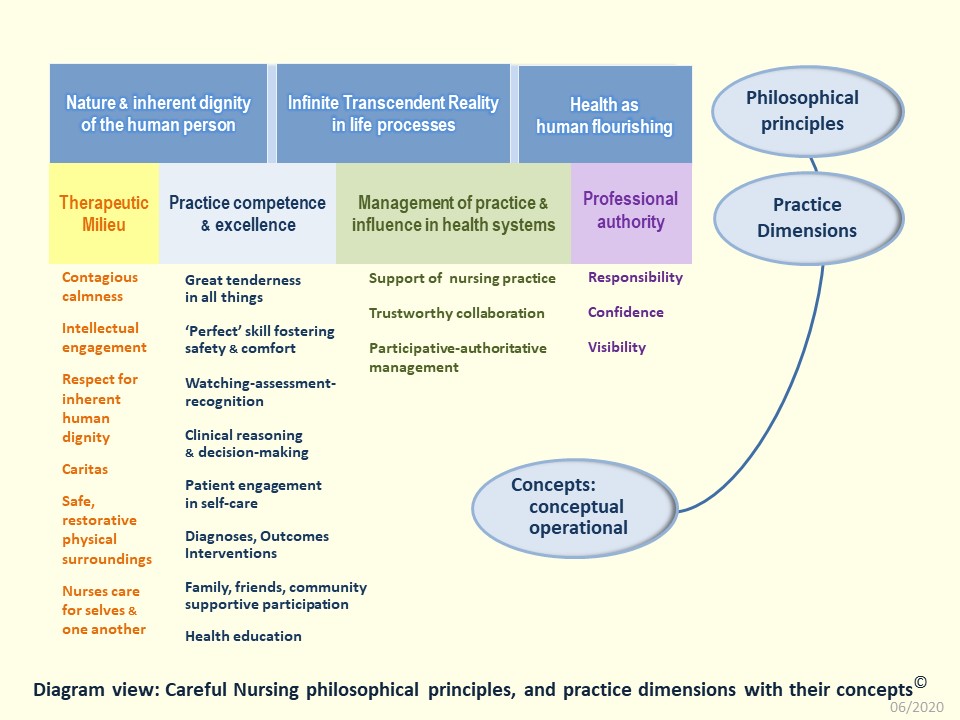 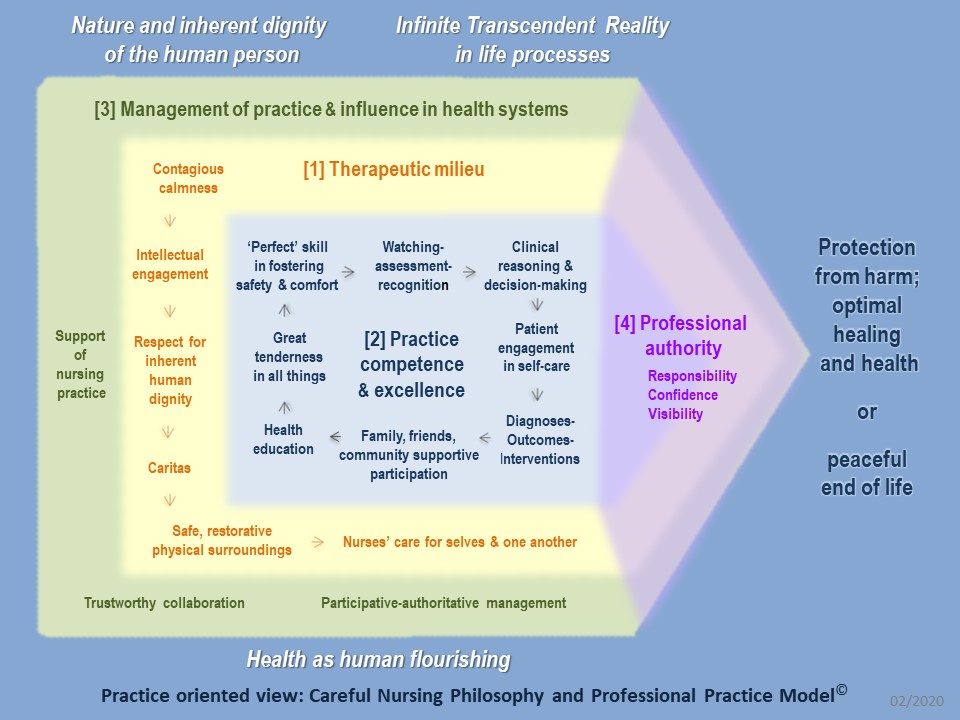 The second practice-oriented Figure represents nurses in action. The sick, injured and vulnerable people nurses care for (patients) are not represented in this Figure but are the focus of the practice it represents.

Relationship between the professional practice model and the philosophy

The philosophy and professional practice model are integral, that is, they can't be separated. They must always be "talking" to and "listening" to one another so that they work smoothly together. While many conversations back and forth take place, they can be summarised as follows:

The professional practice model explains that it was developed from real life nursing practice of a very high standard and describes its history and its responsibility to societies to provide them with its distinctive nursing service to the highest possible standard. It points philosophy to its four dimensions and twenty concepts in the two Figures above and explains that professional nursing is a nurturing, relational profession concerned with protecting people from harm and fostering their healing and health (and sometimes a peaceful, natural end of life), within the context of nurse-patient relationships.

Given its nature, the professional practice model asks philosophy for a reasoned, critically analysed, coherent framework of ideas and assumptions that are consistent with its nature. It is looking for an answer that will help nurses understand, explain and develop Careful Nursing practice in explicit detail.

The professional practice model also asks philosophy for practical ideas that will help nurses further develop their critical thinking ability so they can engage in reasoned argument to debate the strengths and limitations of Careful Nursing ideas, assumptions and propositions, especially with regard to nurses' relationships with patients and their relationships with one another. It also asks philosophy for ideas that will help nurses understand and explain clearly how they implement the Careful Nursing dimensions and concepts.

Philosophy lays out for the professional practice model its great expanse of knowledge developed over many centuries and invites it to choose ideas and systems of thought that are consistent with its experience of nursing practice, management and leadership which will best explain its professional activities in explicit detail. Philosophy explains that its primary method of knowledge development is reasoned argument and that it excels in critical thinking.

Philosophy enthusiastically engages in this conversation because its reason for existence is to offer its knowledge to all disciplines and fields of study for them to select the ideas and assumptions that are consistent with their aims and mission (Scruton 2005). Philosophy assures the professional practice model that once it chooses the ideas and systems of thought which are consistent with its practice, it will stimulate and guide debate about them and inform and infuse nurses' practice explicitly with its chosen ideas and systems of thought.

The following Figure shows how the professional practice model is embedded in the philosophy, in other words, what nurses do depends on what they think and know; the practice of nursing is embedded in and guided by the mind of nursing. 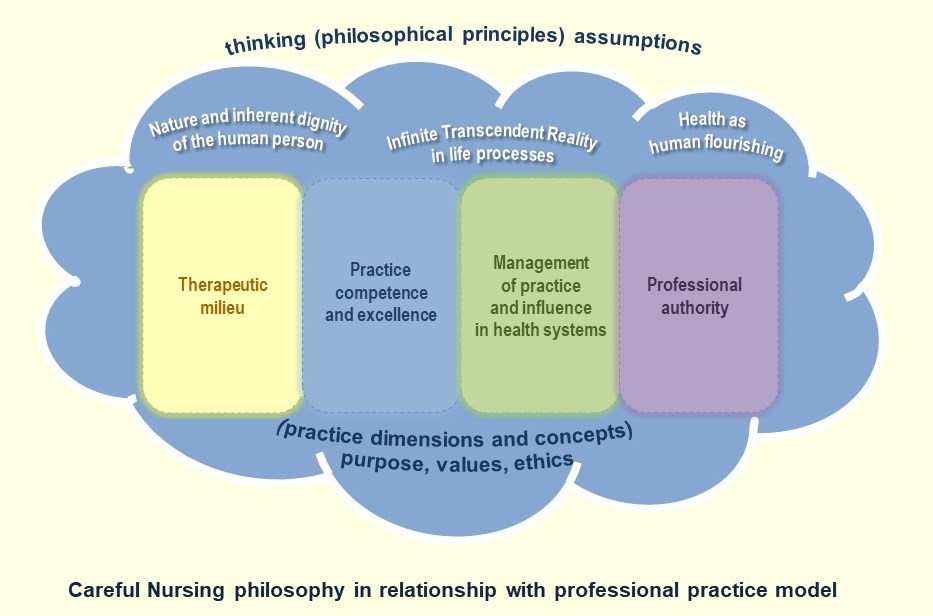 Philosophy suggests that its on-gong conversation with the professional practice model be structured in the three ways suggested by Bruce et al. (2014):

These three ways of relating philosophy to practice are described in the first philosophy webpage. The philosophy and its principles, and the dimensions and their concepts are described and explained in their separate webpages.

The historical data on which Careful Nursing is based described nursing thinking and practice that actually took place which has been judged to represent skilled, acclaimed nursing practice (Nutting & Dock 1907/2000, Doona 1995). The historical data did not fit the structure of a conceptual model of nursing but fitted very well with the structure of a combined philosophy and professional practice model.

Careful Nursing is not concerned primarily with advancing nursing science. Rather, as a philosophy and professional practice model Careful Nursing is concerned primarily with strengthening nurses' control over their practice and practice environment, and demonstrating clearly nursing's distinctive contribution to care of sick, injured and vulnerable people. This is the primary concern of all professional practice models (Slatyer 2016). At the same time, following from its primary practice concern, Careful Nursing is well placed to contribute to the development of distinctively nursing knowledge from philosophical, scientific and practice perspectives.

Following Dubin (1978), Moore (2011) defines a theoretical framework as 'a group of statements composed of concepts related in some way to form an overall view of a phenomenon', in our case, Careful Nursing. Moore (2011) observes that theoretical frameworks provide two types of explanations about phenomena (observable facts and events) in the world. One type of explanation is descriptive, for example, defining, describing and understanding relationships among Careful Nursing principles, dimensions and concepts (variables). The other type of explanation is prescriptive, for example, proposing outcomes of implementation of philosophical principles and practice dimensions and concepts.

It is anticipated that over time Careful Nursing will contribute significantly to development of knowledge about the nature of nursing and to the development of middle-range nursing theories.

Nutting A & Dock L (1907/2000) A History of Nursing From the Earliest Times, to the Present Day With Special Reference to the Work of the Past Thirty Years. Vol.3 Bristol, UK, Thoemmes Press, 86.