This page goes into more detail about why Careful Nursing has a philosophy and why philosophy in very important for our profession.

You'll be able to read a great "must read" article – Understanding philosophy in a nurse's world: what, where and why? – along with suggestions for how to read the article.

In this article you'll learn how philosophy helps us to think more critically about our profession and professional practice, and you'll find guidelines for applying its ideas about philosophy to Careful Nursing.

You'll be prepared to see that the philosophy of Careful Nursing is not a hard-to-pin-down background perspective; rather, it's a specific, detailed framework of ideas about the nature of human beings, human relationships and health that are consistent with the nature of professional nursing.

Too often we dismiss philosophy as something obscure that has nothing to do with our practice. It is true that much contemporary academic philosophy is criticised for being very technical, narrowly focused and detached from human concerns (Norris 2014).

But this is not how we understand philosophy in Careful Nursing. Our aim is to think philosophically about nursing ideas and how we practice.

Implicitly, we think philosophically about nursing every day without realising it, for example, every time we reflect on our practice, question our practice or wonder what components of our practice actually mean. But sometimes we think about things on the surface. In emphasising philosophical thinking our aim is to think in a deeper way and to think explicitly, that is, to clarify and critique what we think and why we think it.

For example, we frequently say we practice nursing holistically but do we know what holistic actually means? Holistic is given different meanings. Increasing, we talk about person-centred care but how do we define a person? What does it mean to be a person? What do we mean when we say we give person-centred care? If we don't think philosophically we can be at risk for not really knowing what we are talking about.

Philosophy has its roots in the ancient world as philo-sophia, love of wisdom. Wisdom was sought by observing and experiencing the whole of reality and, through reflection and reasoning, seeking to understand human life and relationships and how to lead a good and flourishing life. In nursing we can think of this as reflecting on the reality of our nursing world, using reasoning to examine the concepts we use and how we apply them in practice. Philosophical thinking underlies out aim to practice nursing in the best possible way; it helps us to flourish as nurses.

Reference to 'reflecting on the reality of our nursing world' may suggest the popular 'reflective practice' movement in nursing. But, reflective practice does not appear to include philosophical thinking (Dubé & Ducharme 2015). While philosophical thinking involves reflection, it takes place within a broader approach to questioning and thinking about the nature of nursing and nursing practice.

Philosophy is important because it is 'a natural extension of our interest in truth' (Scruton 2005, p. 9). That is, it helps us to identify different ways of thinking about nursing knowledge and different approaches to nursing practice (Forss et al (2013). Philosophy helps us individually and as a profession to identify explicitly what we think is true about nursing. We know from experience that in good times and in challenging times, what we think is true about nursing is what brings most of us to our practice each day.

The vital importance of philosophy for all nurses is discussed beautifully and accessibly by Bruce, Rietze and Lim in their article 'Understanding Philosophy in a Nurse's World: What, Where and Why?' published in Nursing and Health 2(3): 65-71, 2014: http://www.hrpub.org/download/20140701/NH2-16802412.pdf This is a 'must read' article for all nurses.

How to read this article

Philosophy helps nurses to think more critically and reflect on how their own values influence their practice and way of being. A better understanding of the importance of philosophy in the nurses' world is not only relevant but vital to our discipline and professional practice.

The following Table emphasises the importance of philosophy for nurses: 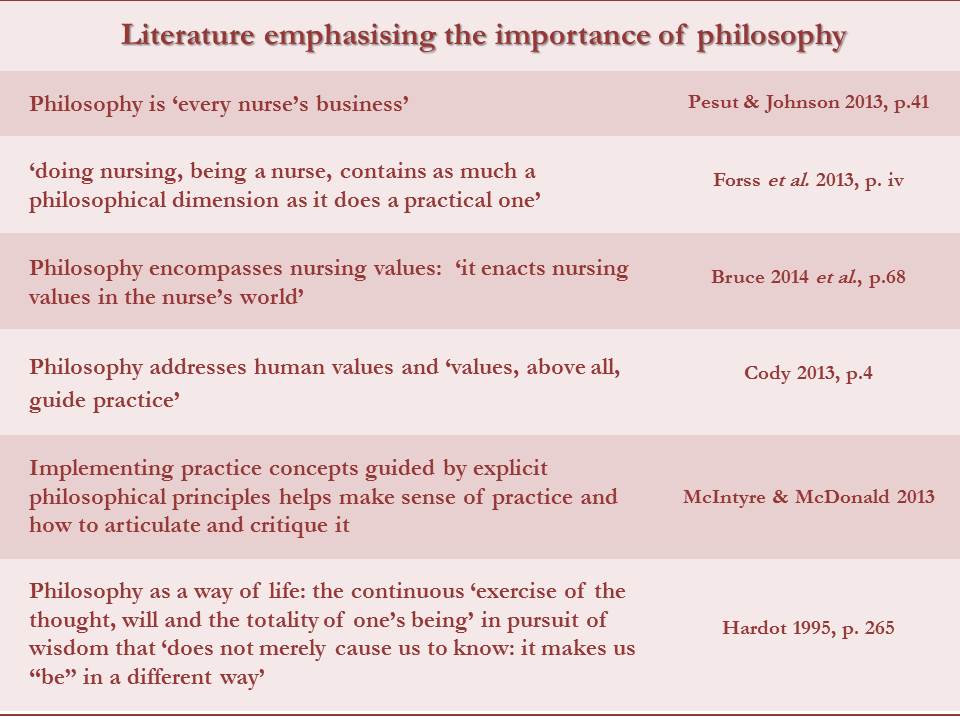 The role of philosophy in Careful Nursing follows that proposed by Bruce et al (2014) in the 'must read' article noted above and is outlined in relation to Careful Nursing in the following Table: 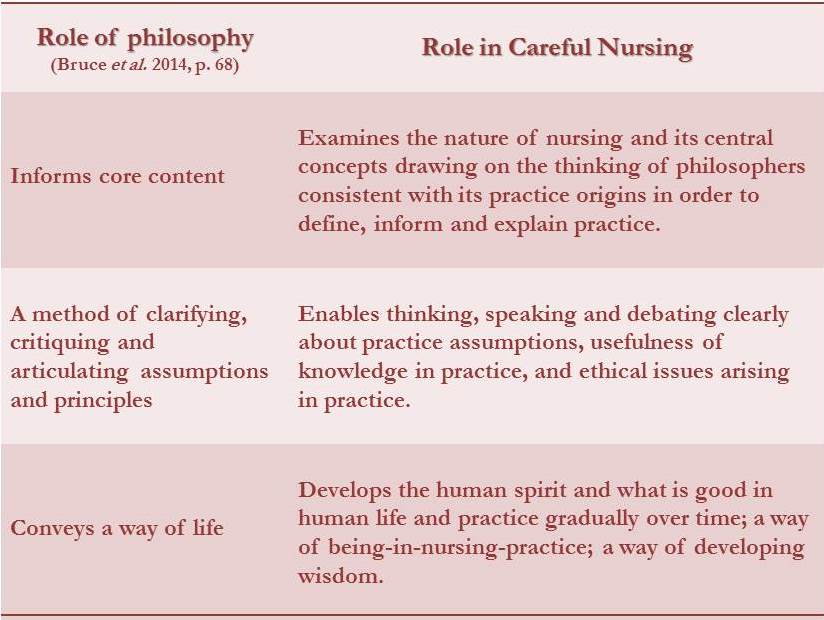 The importance of using philosophical thinking to examine the core content of a given nursing model or theoretical framework is highlighted by McIntyre and McDonald (2013, p. 14); they aim to counter our tendency to take-for-granted the meaning of common nursing concepts, observing that:

. . . concepts such as health, caring, or person, frequently referenced in nursing theory, lack meaning in themselves, remaining at an abstract level, until the specificity of philosophical assumptions attributed to them are clearly explicated. In the absence of explicit meaning, nurses tend to fall back on taken-for-granted meanings arising from Western culture such as health as the absence of disease.

McIntyre and McDonald make an important point when they say that philosophical assumptions underlying concepts must be made explicit.

Advantage of non-nursing sources of philosophy

McIntyre and McDonald (2013) propose that using knowledge from non-nursing sources brings depth to and enriches other possible ways of understanding key nursing concepts, for example person, health and the nurse-patient relationship. Careful Nursing draws primarily on a non-nursing philosophical source, the neo-Aristotelian philosophy of Thomas Aquinas (1265-1274/2007). Aquinas is widely regarded as one of the greatest philosophers of his time and his thinking is equally applicable today (McCabe 2008).

Philosophical thinking as a way of life

Philosophy as a way of life reflects the original understanding of philosophy in the ancient world (Hadot 2005) where the search for wisdom was viewed as a life-long process;. In fact, thinking philosophically was considered a therapeutic process which relieved human anguish by bringing 'inner freedom', 'peace of mind' and 'a cosmic consciousness' (Hadot pp. 265-266).

Our philosophical thinking can be thought of as a way of life in nursing, something we are already doing implicitly without realising it. The more we realise this and learn to think explicitly, the more we too may experience the therapeutic value of thinking philosophically.

Importantly, our philosophical thinking encompasses our understanding and expression of human values. A value is a power that motivates us (Stein 1922/2000). Values specific to nursing and values associated with nursing are the powers that motivate our practice. The values that guide Careful Nursing practice emerge from its philosophical principles and motivate our implementation of the practice dimension concepts.

Where did the philosophy of Careful Nursing come from?

The philosophy of Careful Nursing emerged from documentation of the 19th century Irish nurses' cultural and educational background and practice records. For example, it is evident in the books they read, the time they spent undertaking nursing training in hospitals run by nursing sisters in Paris, and their study of historical figures identified as nurses (Meehan 2012a).

The philosophy is also evident in the documentation of the nurse's practice and in observers' descriptions of their practice. The philosophy of Aquinas and that of modern and contemporary philosophers who think in the tradition of Aquinas is the most consistent with the knowledge and practice of these nurses.

Content analysis of the documentation of the 19th century Irish nurses' knowledge and practice gave rise to three categories which were identified as philosophical assumptions (Meehan 2012b). Subsequent experience implementing the assumptions in practice and consultation with a philosopher led to more precise statement of the assumptions and to calling them principles (Meehan 2014). These are shown in the following Figure: 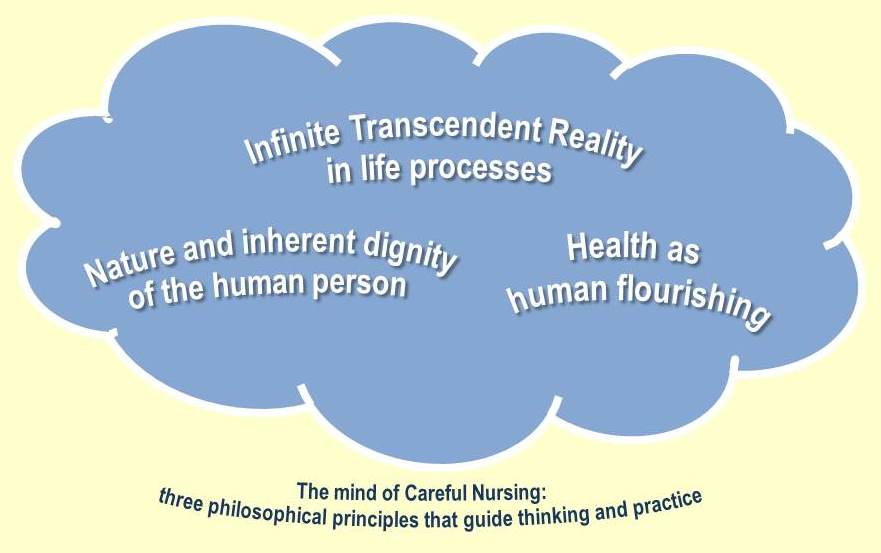 Before continuing to think about each of the above principles in detail in their following webpage sub-sections, here is a word of warning about the challenge ahead.

As mentioned above, it is fundamentally important that we as nurses think about ourselves and the people we care for in ways that are consistent with nursing. Too often our thinking is dominated by the biomedical thinking of most healthcare organisations (Mazzotta 2016). Collaboration between nursing and medicine has a long history and is vital to patient care and safety. As part of our 24/7 distinctive, relational continuity with patients to assure their protection and support, we 'stand in' daily for medicine and other health professions when they are not present. We have the 'big picture' (Keenan et al. 2012) on patients' status. We are usually first to become aware of any bio-physiological complications that could threaten a patient's life.

Our responsibility to engage in collaborative practice requires that we are knowledgeable about bio-physical functioning of human beings, disease processes and biomedical thinking about effects of medical tests and treatments. We must know how to act swiftly and appropriately in a biomedical emergency.

At the same time, nursing is not a branch of medicine. Biomedical thinking is not, as such, nursing thinking.

The name 'nurse' specifies that nursing is distinctively different from medicine. Nursing is a nurturing, relational profession concerned with protecting people from harm and fostering their healing and health within the context of nurse-patient relationships.

Based on the Careful Nursing understanding of the aim and responsibility of nursing we have asked philosophy how we can think about human beings and human relationships in ways that are consistent with nursing (see Introduction to Overview).

Now continue to the three philosophical principles noted above in their following webpage sub-sections.

Brett GJ. (2013). The Theological Notion of the Human Person: A Conversation Between the Theology of Karl Rahner and the Philosophy of John Macmurray. Peter Lang.

MacIntyre A (2016) Ethics in the Conflicts of Modernity: An Essay on Desire, Practical Reasoning, and Narrative. Cambridge University Press, Cambridge.

Mazzotta PC (2016) Biomedical approaches to care and their influence on point of care nurses: a scoping review. Journal of Nursing Education and Practice, 6, 93-101.

McIntyre M & McDonald C (2013) Contemplating the fit and utility of nursing theory and nursing scholarship informed by the social sciences and humanities. Advances in Nursing Science, 36, 10–17.

Meehan TC (2012a) Spirituality and spiritual care from a Careful Nursing perspective. Journal of Nursing Management, 8, 990-1001.