You'll see in the following illustration that this principle is the third of the three principles that together make up the mindset of Careful Nursing. This page describes how for Careful Nursing, health came to be defined as human flourishing.

Firstly, you'll find that the idea of human flourishing came from the historical nursing documents on which Careful Nursing is based. People depended on nursing care for their survival and flourishing before the development of modern medicine.

In early to mid-19th-centuary Ireland, poor people lived under extremely challenging conditions. People welcomed nurses' care for them because it gave them hope and helped them use their initiative and inner resilience to be as healthy as possible.

Despite all the challenges people faced, they had a strong desire to grow and develop as living organisms and flower in their own way, reaching towards their highest potential; they are best described as having an inborn desire to flourish.

Secondly, you'll find that as Careful Nursing was developed it was recognised that its philosophers, Aristotle and Aquinas, had well developed and very practical theories of human flourishing, called virtue theories.

Development of health as human flourishing in Careful Nursing

This principle has been developed in two stages; an earlier stage based on the early to mid-19th historical documents on which Careful Nursing is based, and a later stage based on the philosophical virtue theories of Aristotle (350BCE/1998) and Aquinas (1265-1274/2006), which have human flourishing as their aim.

Analysis of the early 19th century Careful Nursing historical documents led to development of the original definition of health as human flourishing (Meehan 2012). Documents from the 1820s describe the nurses' care for people in their homes. The people were mainly poverty-stricken families who were frequently affected by famines and disease-induced fevers; they had very limited access to medical care and faced many direct threats to their life.

The 1830s historical documents describe the nurses care for people in cholera hospitals, and in workhouse hospitals during times of crisis. The nurses came to collaborate closely with surgeons and apothecaries and became well-known and widely respected amongst the Irish population. However, medicinal, surgical and medical treatments remained limited in effectiveness.

Sick, injured and vulnerable people relied mainly on their own resilience to restore and maintain their health. Generally, people had a deeply spiritual sense of life, a quick wit and sense of humour, and welcomed the nurses care as a source of hope in their lives.

Despite their susceptibility to illness and injury and gruelling living conditions, people sought to flourish in the dictionary meaning of the term; to grow and develop as living organisms and flower in their own way, reaching towards their highest potential.

It was against this backdrop that health in Careful Nursing came to be identified with flourishing. Health as human flourishing was then defined in relationship to the first two philosophical principles of Careful Nursing (Meehan 2012).

Significantly for nursing, in order to flourish living organisms must have nourishment and nourishing surroundings, especially if they are sick, injured or vulnerable human beings. The word nourishing is synonymous with nursing (Nourishing, 2020), suggesting that nursing has a natural concern with health as human flourishing.

Aristotle proposes that we flourish thorough a lifelong process of developing "states of character" (Bk. 2, ch. 5) which will make us good and "make [us] do [our] own work well" (Bk. 2, ch. 6). This involves choosing to develop the habit of thinking and doing things with excellence. Through long practice these habits become "[our] nature in the end" (Bk. 7, ch. 10). The Greek word for such excellence, aretê, is translated in English as virtue. Aristotle describes this process as "an activity of the soul" (Bk. 1, ch. 13), that is, of our life-giving essence as human beings which is distinctively associated with reasoning.

Aquinas (1265-1274/2006), adopted Aristotle's virtue theory, including his idea of human flourishing (I, II, Q. 3, Q. 55-64), as a foundation for developing his own virtue theory. Aquinas defines virtues as natural inward capacities for excellence which, through our rational intellect and will, we express in consistently good ways, or habits, of thinking and doing things well (DeYoung, et al, 2009).

Aquinas adopts the intellectual and moral virtues identified by Aristotle but discusses them in detail. He organizes them under four fundamental virtues: prudence, temperance, fortitude (courage), and justice. He then extends and transforms Aristotle's virtue theory by drawing on the work of other philosophers and grounding his thinking in awareness of an abundantly loving pure spiritual being (Infinite Transcendent Reality in life processes) with whom human persons have a participatory relationship. From his spiritual perspective Aquinas proposes three additional virtues: faith, hope and love (caritas).

Neither Aristotle nor Aquinas link flourishing directly to health. However, Aristotle proposes that we need to have our basic needs met in order to flourish; needs such as food, shelter, clothing, a sound body and mind, and good domestic and civil circumstances. Nonetheless, both philosophers imply persuasively that overall health for the human being as a unitary whole is the process of seeking to achieve full flourishing. Further discussion of the virtue theories of Aristotle and Aquinas can be found here

The virtue theories of Aristotle and Aquinas have been developed further by contemporary philosophers as theories of virtue ethics, notably by Alasdair MacIntyre (2007). They describe the practice of virtues as ways of functioning well, particularly doing our work well, and flourishing in the contemporary social, political, and economic context.

Of particular interest for Careful Nursing is a group of papers on health and human flourishing edited by Taylor and Dell'Oro (2006) in which the definition of human beings as unitary persons is the same as for Careful Nursing. The experience of vulnerability in illness and the importance of compassionate care-giver attentiveness are discussed in detail. The virtues of faith, hope and love in the provision of health care are shown to have a central role in fostering human flourishing in both patients and caregivers.

Development of health as human flourishing in psychology and nursing literature

Flourishing understood as happiness is completely different the Aristotle/Aquinas understanding of flourishing as aiming to achieve an objective state of goodness. The English word happiness comes from its Middle English origin, hap, meaning to have good luck or to achieve something by chance or good fortune (Partridge 1983, p. 278).

Thus, in psychology achieving well-being and finding meaning and purpose in life is mainly associated with positive emotional experiences, as is the main focus of positive psychology. An attempt to re-introduce to psychology the development of character strengths, such as honesty and self-control, as part of achieving flourishing (Niemiec 2014) appears to have had little influence (Cho & Docherty, 2020).

Interest in human flourishing in nursing has grown in recent years, for example, as a nursing goal for patients from an Aristotelian perspective (Fanning, 2001), as a practice outcome related to a unitary nursing model (Cowling & Swartout, 2011), in association with healing and health in vulnerable patients (Sellman, 2005), and as a broad vision for nursing practice (MacCulloch, 2011).

Agenor et al (2017) conducted an evolutionary concept analysis of human flourishing limited to contemporary psychology and sociology literature. They found flourishing to be associated with positive emotions and relationships, self-esteem and self-awareness, and meaning and purpose in life. Cho (2019) found that healthcare providers perspectives of human flourishing in adolescents with cancer included emotional, social, economic and spiritual factors and a sense of purpose in life.

Nonetheless, one impressive exception to the positive psychologists' view of human flourishing is a nursing professional practice model developed by Jacobs (2013), from Carper's patterns of knowing in nursing and Aristotelian intellectual virtues, as well as moral virtues. In this model nurses' promotion of patients' flourishing as the ultimate good, in its Aristotelian meaning, is argued to be intrinsic in the essential nature of nursing practice.

Jacobs (2013) proposes that nurses as virtue-guided moral agents pursue excellence in the clinical details of their practice. In their relationships with patients, they enhance patients' flourishing as well as their own flourishing. Thus, human flourishing becomes the philosophical end of professional nursing for both patients and nurses.

Further development of health as human flourishing in Careful Nursing

As a philosophical principle of Careful Nursing, health as human flourishing has potential for using the virtue theories of Aristotle and Aquinas to guide deeper insight into understanding and human flourishing and particularly in implementing nursing values.

Contemporary understandings of ethical and moral values that guide the nursing profession's codes of professional conduct and ethics have evolved over time from earlier interpretations of virtue theories. Using virtue theories, Careful Nursing could guide re-examination of professional nursing values and their implementation to foster human flourishing more widely in nursing practice and patient care.

In Careful Nursing practice we consider health as human flourishing on two levels. The first level can be thought of as the desired basis for flourishing, that is, people's immediate bio-physical, psycho-spiritual and social needs for must be aimed for; needs such as food, shelter, clothing, a sound body and mind, and good domestic and civil circumstances.

Although every effort is made to achieve this level it may sometimes be possible only to a limited extent, for example, for people living in a poor country or under repressive civil circumstances.

Think of how often we have the opportunity to choose to act with courage. For example, during multidisciplinary patient rounds we might sometimes find that it takes courage to choose to emphasize the importance of nursing diagnoses and how they are being addressed, rather than choosing (perhaps in face of a fast-moving surgical team) to be timid and not mention them or choosing to brashly select and address them without collaboration and discussion.

Practicing with a team of colleagues and assistants offers us many opportunities to choose to be good tempered and not respond to seemingly thoughtless interruptions with either apathetic indifference or bullying hostility.

In seeking to flourish ourselves, we naturally foster flourishing in the people we care for whose sickness, injury or vulnerability can make it particularly challenging for them to choose to act in excellent ways. We support them in this constantly, although we probably don't usually think about it in relation to virtues.

Consider how often we support patients in choosing to act with courage; patients newly diagnosed with Type I diabetes facing many new self-care challenges, patients facing frightening high-technology examinations; patients facing an arduous course of treatment such as chemotherapy. Helping patients to act with courage when discussing their condition and treatment with a physician or surgeon can be particularly important.

We often play a major role in helping patients to be good tempered and have patience both with themselves and others, rather than sinking into dejection on the one hand or striking out with irritability on the other. Think also of how often our health teaching involves helping people choose to act with temperance, such as guiding chronically overweight patients to choose ways not to overindulge in the pleasure of rich food.

There are many virtues, or qualities of character that chronically ill or disabled patients need our assistance to develop so they can make realistic adjustments under challenging circumstances and, nevertheless, work toward leading a flourishing life.

Finally, in Careful Nursing it is recognised that ideally, health is associated with the relative absence of disease. But, health as human flourishing can still be fully experienced in states of disability, chronic illness or living under difficult socioeconomic circumstances and conflict.

Healing is a natural restorative process. But, given our human propensity for conflict on many levels, it seems necessary that health as human flourishing will also include the ability to accept with equanimity circumstances which are unjust but may be very difficult to alter. 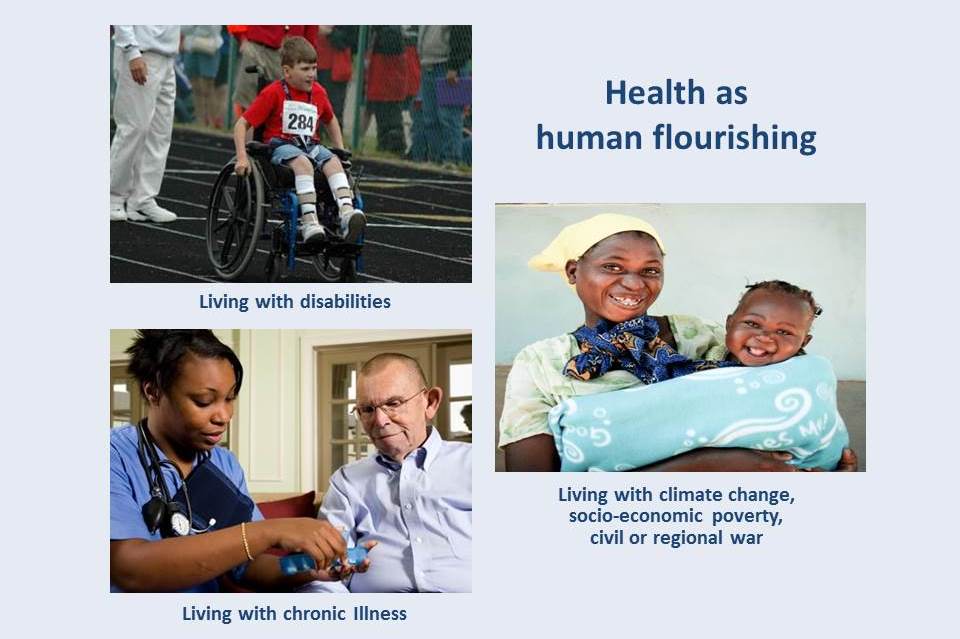 Cho E & Docherty SL (2020) Beyond resilience: A concept analysis of human flourishing in adolescents and young adults with cancer. Advances in Nursing Science, 43, 172–189.

Sellman D (2005) Towards an understanding of nursing as a response to human vulnerability. Nursing Philosophy, 6, 2–10.

Waterman AS (2008) Reconsidering happiness: A eudaimonist's perspective. The Journal of Positive Psychology, 3, 234–252.

Baby Joyce with her mother, Courtesy of World Vision Ireland.