This page introduces the Therapeutic Milieu, the first of the four dimensions of the professional practice model (PPM) of Careful Nursing. The word milieu means the physical and social surroundings in which something occurs and develops, in this case patient care and nurses care for themselves and one another.

You'll be introduced to the six ideas that guide how we as nurses create a healing milieu – by focusing on the manner of how we practice. You'll see how our practice of "stillness" during personal time every day, discussed in the philosophy section, underpins our creation of a Therapeutic Milieu.

As you continue to read through the six Therapeutic Milieu ideas, you will also see that each idea builds on the ideas that go before it

This page will remind you that wards and nursing units are traditionally and primarily the 24/7 responsibility of professional nurses; they're nurse-led.

This page also highlights two distinctive characteristics of the Therapeutic Milieu, the role of spirituality in nursing and our dual care responsibility - to care for ourselves and one another as well as for patients.

The Therapeutic Milieu dimension of the professional practice model (PPM) is the distinctive nurse-created, nurse-led healing and protective culture and atmosphere of a hospital ward, nursing unit or other nursing practice setting within which all healthcare professionals' and their assistants' practice takes place. The Therapeutic Milieu is more than an environment; it is a healing culture rich in therapeutic inter-personal relationships and co-operative attentiveness to patients; its physical features are as soothing as possible and arranged to provide optimum safety and comfort for patients, nurses and all who enter the milieu.

The six Therapeutic Milieu concepts operationalise and guide nurses' practice. The order in which the concepts are presented was revised in 2019 following consultation with philosophy tutors at the annual Aquinas Institute of Ireland Summer School. The revision reflects how the six concepts build logically on one another

The Therapeutic Milieu is created primarily by how nurses are in themselves and by the manner in which they practice. Nurses' capacity to create a Therapeutic Milieu is dependent on their practice of at least five minutes of "stillness" every day during personal time, that is, any meditative practice that fosters their awareness of their inner being as human persons.

Nurses who practice in a community and attend to people in their home can think of the therapeutic milieu and its concepts as qualities they take with them in themselves when they enter a persons' home or other home setting. 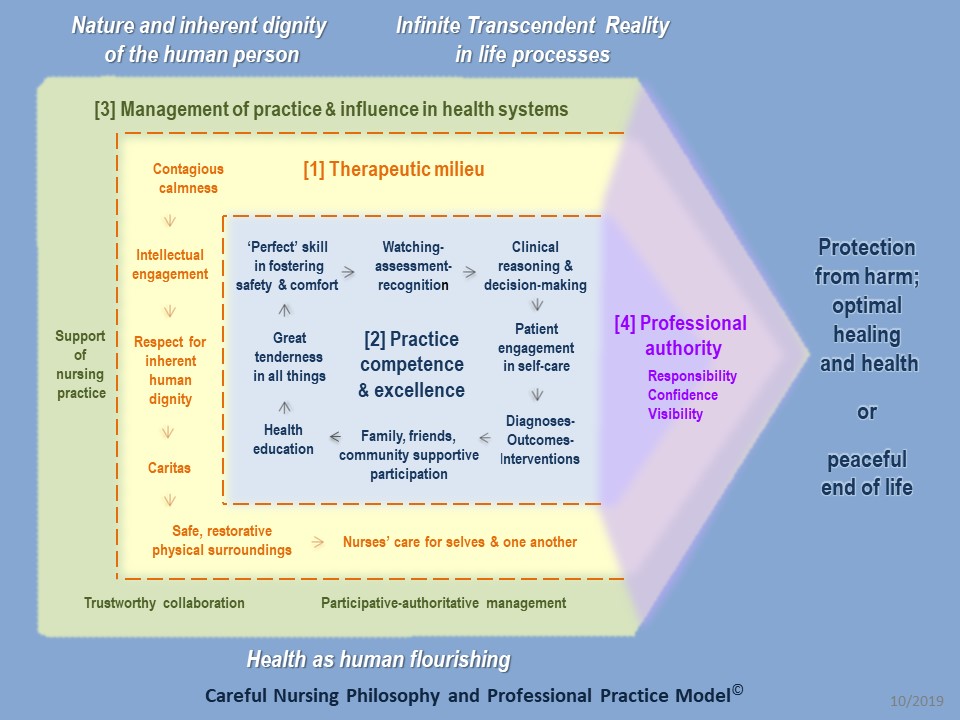 The purpose of the Therapeutic Milieu is four-fold:

♦ provide nurses with a healing surrounding in which to practice, enabling them to care for themselves and help and support one another to practice together well

♦ engage and support everyone concerned with patients' care; patients' family and friends, other health professionals, and assistive personnel.

♦ highlight that patient care areas in hospitals are traditionally and primarily the 24/7 domain of professional nurses and, thus, are properly nurse-led

The Therapeutic Milieu dimension of Careful Nursing reflects an historical fact that for centuries nurses have been primarily responsible for the management and quality of patient care areas in hospitals, traditionally called wards (and still called wards in most countries except the United States). The words ward and guard have the same origin and meaning (Partridge 1959) and until the 19th century were used synonymously in reference to protecting vulnerable people from harm. People in hospitals were guarded or warded by nurses, hence the inseparable relationship between nurses and their particular responsibility for the management and quality of a ward, nursing unit or other practice setting.

Naturally, all healthcare personnel in a given ward or unit contribute to its quality, but its quality is primarily created and sustained by professional nurses in co-operation with their care assistants and other assistive personnel; other health professionals come and go but nurses, in their 24/7 relational continuity with patients, are always present. The Therapeutic Milieu provides the co-operative healing context within which all multidisciplinary care takes place, as illustrated in the following diagram: 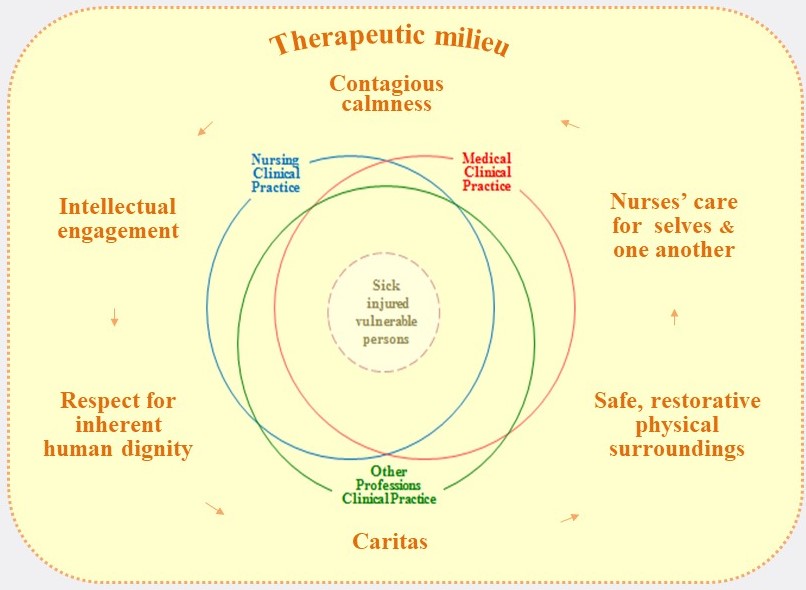 Our nursing role in creating this milieu is so fundamentally important that it is often taken-for-granted by others. As nurses we must be mindful not to take this important responsibility for granted ourselves. In creating a therapeutic milieu we make this responsibility visible to ourselves and others by naming how we create and sustain it, guided by the six therapeutic milieu concepts.

Of the four Careful Nursing PPM dimensions, the Therapeutic Milieu dimension is the most directly concerned with guiding nurses to operationalise the spiritual philosophical principles of Careful Nursing.

Nurses' personal practice of a meditative "stillness" every day for at least five minutes enhances their awareness of their inner spirituality and enables their ability to be contagiously calm in practice. In turn, contagious calmness enables nurses to think clearly; to be intellectually engaged in their practice. As persons, nurses' intellect is intimately related to the spirituality of their inner life. Nurses' spirituality enables and enhances their respect for inherent human dignity and expression of Caritas.

The Therapeutic Milieu dimension recognises and enables a touchstone of nursing practice; nurses' dual responsibility to care for themselves and one another as well as for sick, injured and vulnerable people. Nursing literature strongly supports the point that if nurses do not care for themselves and one another their care of patients can become seriously compromised.

In the following six pages we will review each of the six therapeutic milieu concepts. Keep in mind that each concept is infused and informed by the philosophical principles.

Especially keep in mind that the practice of "stillness" for at least five minutes every day underpins implementation of the therapeutic milieu concepts.

For each concept you will be encouraged to think of 'I will' statements (recall from previous professional practice model page) which you will be able to use to help you implement the concept in practice.