Descriptions of the early to mid-19th century Irish nurses' ideas and practice, written by themselves and by their observers, offered an obvious foundation for the construction of a contemporary conceptual model of nursing. Beginning in 2001, and with the support of fellowships from the Barbara Bates Center for the Study of the History of Nursing, University of Pennsylvania, USA, and the Eleanor Crowder Bjoring Center for Nursing Historical Inquiry, University of Virginia, USA, Therese Meehan conducted historical research necessary to identify and analyse the historical documents. These documents were then subject to content analysis and the resulting categories and subcategories were translated into concepts and dimensions of concepts. This process made it possible to construct the contemporary philosophy and model.

The findings of a preliminary discursive study (Meehan 2003) of the nurses' ideas and practice were published. Beginning with the well-documented nursing work of the Sisters of Mercy at the Crimean war, the source of their ideas and practice was traced back to Catherine McAuley who commenced her nursing work in Dublin around 1798. As other women joined her in the 1820s their knowledge and skills appeared to have developed rapidly due their commitment and initiative and a great public demand for their care.

It is explained that the ten key concepts identified in this study were mapped onto the widely recognised metaparadigm concepts evolved by nurse theorists to provide an overarching structure for the development of nursing as a professional discipline; that is, human being, environment, health and nursing (Fawcett 2005). Each metaparadigm concept was defined from the perspective of the content of the documents. Most of the content focused on nursing practice per se and was sorted into ten key practice concepts which were defined and described. A preliminary model of nursing practice was constructed showing proposed relationships among the concepts. 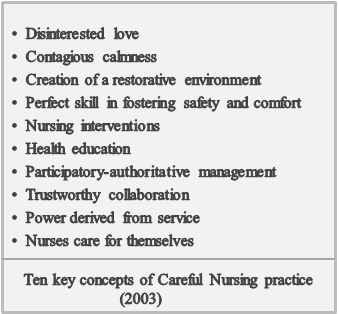 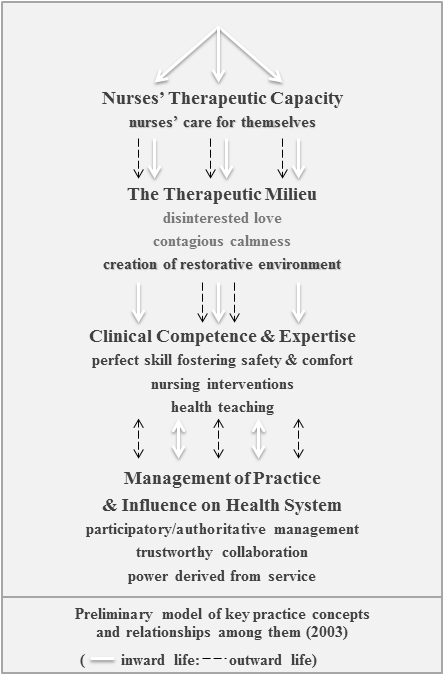 The fact that the spiritual dimension of human life permeates the documents and model is discussed. A philosophical structure congruent with the spiritual aspect of the emerging principles and some concepts was needed in order to examine and understand them and how human spirituality was likely to influence nurses practice attitudes and actions. The philosophical thinking of Thomas Aquinas, as he built on and extended the thinking of Aristotle, was chosen as a philosophical framework because it is wide-ranging, addresses spirituality and the nature of the human being and human relationships, and matches most closely the thinking of the 19th century nurses as it was expressed in the documents.

The structure and utility of the model was assessed and critically analysed by nurses in education and practice in Ireland and the USA. While it was found attractive as a description of nursing practice, it became evident that further elaboration of the model was required to provide more specific direction for practice and theory development.

In addition, it was recognised that the data from the preliminary study had been drawn only from documents which described the work of the Sisters of Mercy and that the Irish Sisters of Charity had also been engaged in developing nursing practice over the same time period. Although documentation of their practice was found to be limited and less accessible, what was available was identified.

In retrospect, it should be said that every conceptual effort was made, probably unwisely, to render the emerging Careful Nursing model consistent with the nursing theoretical metaparadigm concepts proposed by Fawcett (2005). It became evident that this structure had a restrictive effect on the full explication of the concepts represented in the historical documents. Important philosophical principles inherent in the documents were not allowed for. According to Fawcett's view, there seemed to be no place for the spiritual in nursing. Further, Fawcett's proposed world views had no relationship to the philosophy of the model. Thus, Fawcett's approach was put aside.

In preparation for a more comprehensive study, the process of how to best structure nursing knowledge was reviewed. The nursing literature on conceptual models and grand theories of nursing was reviewed, particularly with regard to their use in practice. It was evident that most practicing nurses judged them to be irrelevant to their practice (Risjord 2010). It was also evident to the researcher, from teaching nurses conceptual models and theories for many years, that most nurses in practice were not inspired by them and had difficulty relating them to their practice.

Whatever the reasons for this widespread rejection, it seemed necessary to try a different approach. There were two bottom lines at stake. Firstly, if the majority of practicing nurses reject a distinctive conceptual/theoretical knowledge base for their practice, then nursing cannot be considered a professional discipline and its presence in third-level academic settings is open to question. Secondly, if nursing knowledge is not used by the majority of nurses to improve their practice and patient healing and health, and strengthen and inspire nurses themselves in their own professional-self-development, then it is of little worth.

The findings of a second more comprehensive discursive study of the nurses' ideas and practice, incorporating a wider historical data base, were published (Meehan 2012). From the data three categories; human person, an infinite transcendent reality and health, were judged to primarily concern philosophical assumptions underlying nursing practice. Four categories, with a total of eighteen subcategories, were judged to primarily concern attitudes and actions of skilled nursing practice and were translated into concepts and dimensions of practice. Thus the 19th century nursing system was translated into a 21st century nursing philosophy and professional practice model. 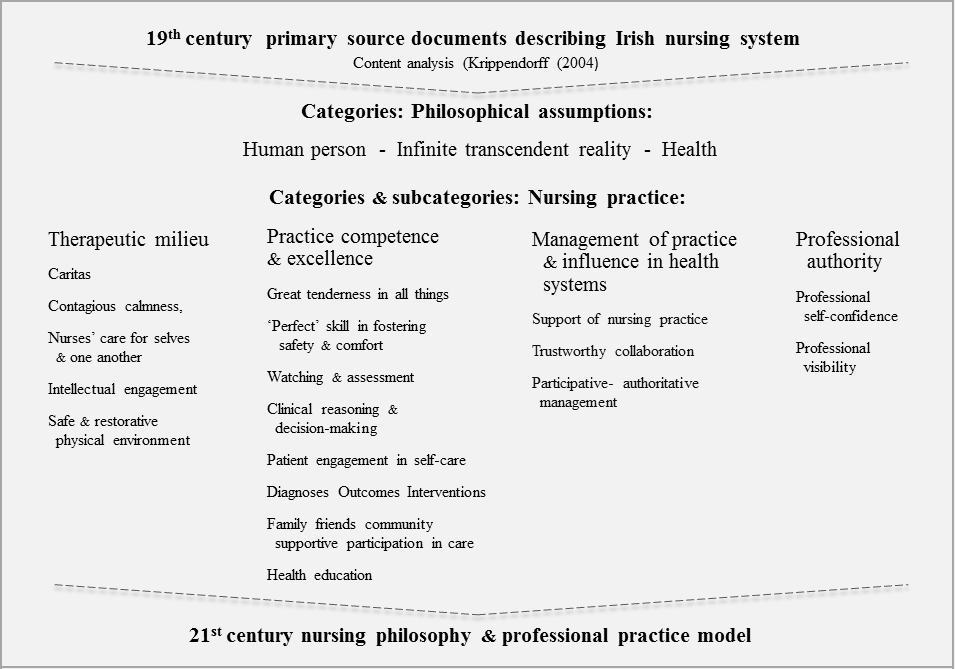 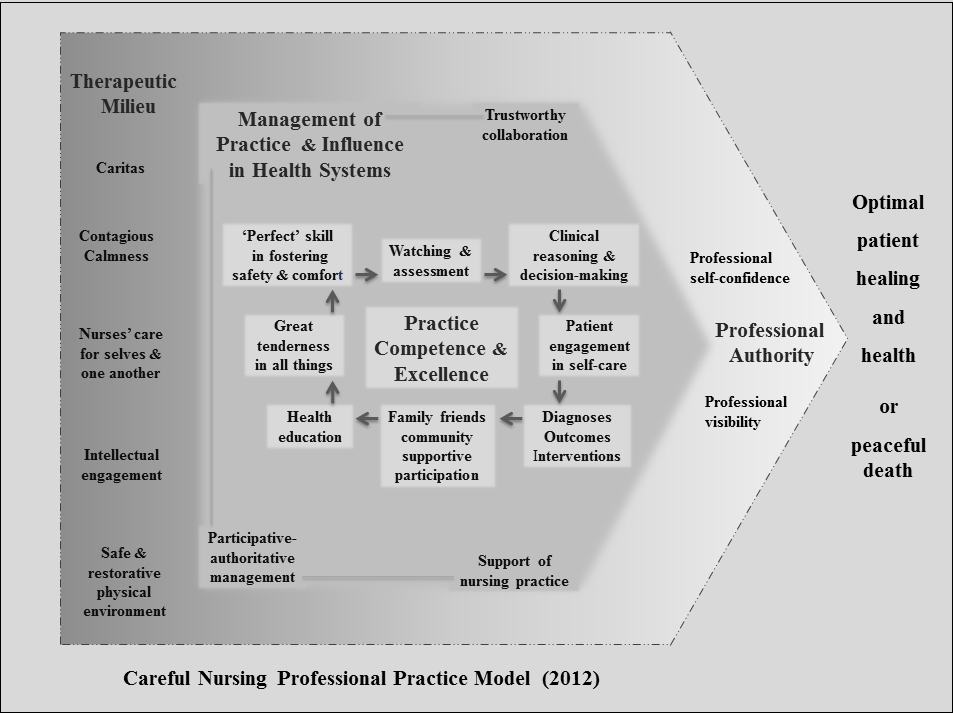 In August 2014 nurses concerned with the model held a half-day meeting chaired by the Careful Nursing philosophy advisor, Dr. Mette Lebech of the Department of Philosophy at the National University of Ireland Maynooth, for discussion and clarification of the philosophical assumptions . Discussion of the philosophy led to identifying the philosophical assumptions as principles and specifying two of these more clearly. Human person became the nature and inherent dignity of the human person, and infinite transcendent reality becaome infinite transcendent reality in life processes

On-going discussion of the professional practice model also led to a change in the use of the terms dimension and concept, which needs some explanation. During the time the professional practice model was being developed, the therapeutic milieu, practice competence and excellence, management of practice and influence in health systems, and professional authority categories, derived through content analysis from the historical documents, were termed dimensions of practice because they appeared to constitute nursing practice. Their subcategories appeared to be nursing practice operations and were termed concepts.

However manuscript reviewers, influenced by prevailing views of conceptual model development in nursing, insisted that these categories and subcategories be termed the other way around. They disregarded the philosophy and viewed the four categories as the main Careful Nursing concepts. Thus, the practice model was published this way in 2012, as referenced in previous CNN articles.

But from a philosophical perspective, Dr. Lebech suggested that the therapeutic milieu, practice competence and excellence, management of practice and influence in health systems, and professional authority are, in fact, dimensions rather than concepts because they are elements of what nursing is; they constitute nursing. This suggestion is consistent with the common definition of a dimension as a measure that encompasses something, in this case what nursing practice is. Thus, these categories were changed back to dimensions.

In keeping with this change, the subcategories were changed back to concepts. This is logical because the subcategories relate to specific instances of practice and the common definition of a concept is an idea derived from a specific instance. An important advantage of having concepts at this level is that a concept has a conceptual definition, to indicate its precise meaning, and an operational definition to indicate its observable operations; here its practice actions and attitudes; that can be watched and measured.

The following illustrations show the revised structure and levels of the philosophy and professional practice model and the four dimensions and twenty concepts of the practice model. 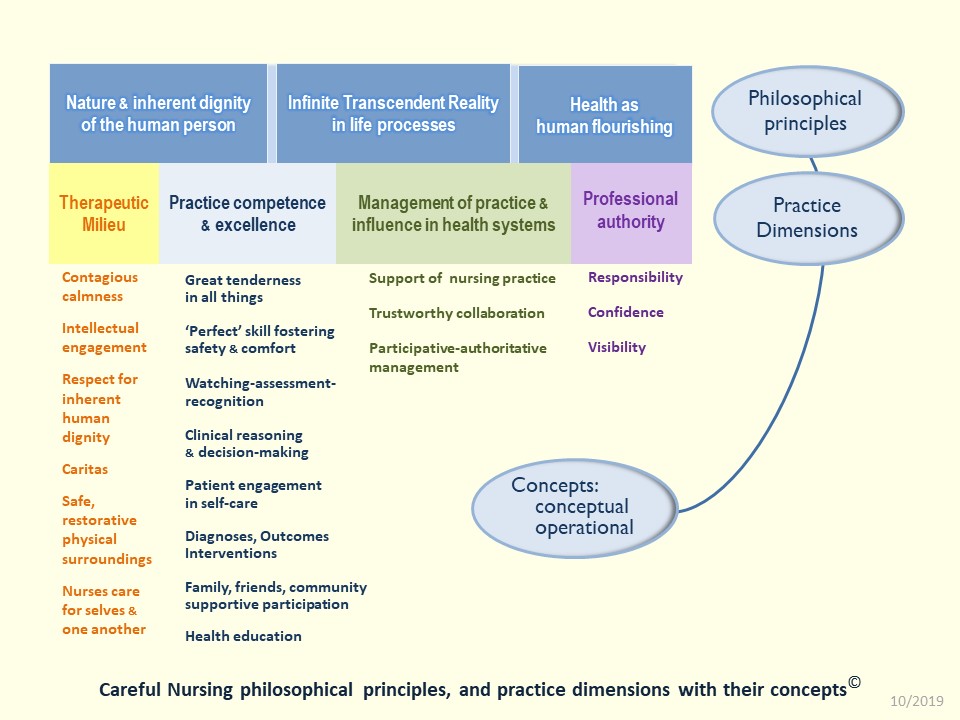 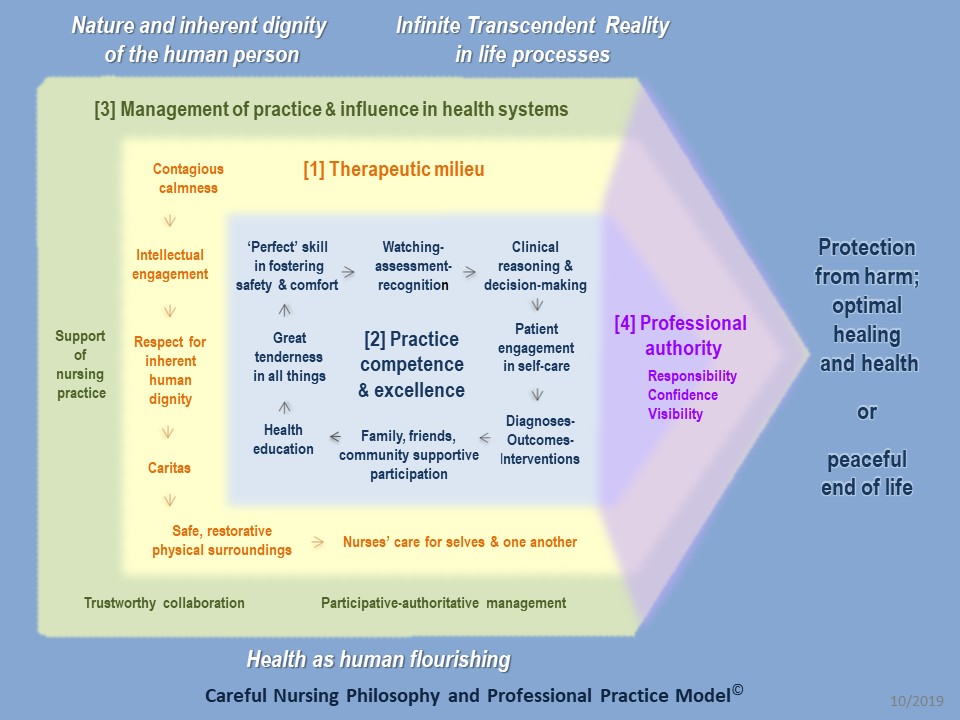 Note that Careful Nursing is a philosophy and professional practice model (Slatyer et al. 2016) and not a conceptual model of nursing.

Careful Nursing continues to be developed as it is implemented in practice and as its principles, dimensions and concepts continue to be examined. Much work is still to be done on clarifying and explicating the philosophy, dimensions and concepts, the relationships among them, and their implications for practice. Further work will also include the derivation and testing of middle-range theories.

The most recent revisions of Careful Nursing are shown under the Resources website heading, under the subheading Diagrams and Illustrations; they show changes in order of the concepts, etc.