Irish Nurses at the Crimean War

Twelve Irish Sisters of Mercy served as nurses at the Crimean war. Mary Clare Moore (1854-1856) led a group of four English sisters from the Bermondsey convent in London's docklands. They worked closely with Florence Nightingale at the Scutari Barrack and General hospitals for seventeen months. Mary Francis Bridgeman (1854-1856) led a group of eleven Irish sisters who worked at the Koulali Barack hospital and the General and Hut hospitals at Crimea.

Generally, Mary Clare and her fellow-sisters began their day at 6:00am with prayer and breakfast. They worked on the wards caring for patients from about 7:00am until about 8:30pm with an hour's break for dinner at 1:00pm and an hour's break for tea and prayer at 5:00pm (Moore, undated letter, circa 1855). They were much admired by their fellow-nurses for their nursing skill, calmness, patience and attentiveness (Richardson 1977). Mary Clare also had charge of the Extra Diet Kitchen, overseeing the preparation and filling of the vitally important diet and fluid requisitions for patients. Although she remained in the background, Mary Clare worked closely with Florence, supporting her with her extensive knowledge of nursing practice and administration. Some sense of this can be seen in the painting, 'Mission of Mercy: Florence Nightingale Receiving the Wounded at Scutari'. Mary Clare can be seen in the shadow to the left. 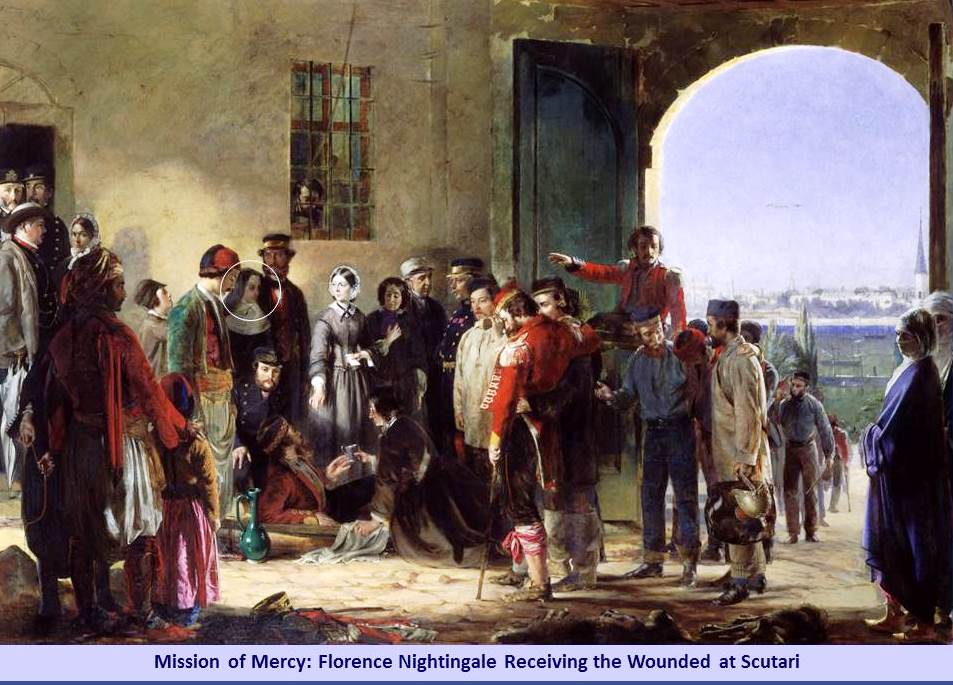 Florence especially appreciated her ability to remain calm under difficult circumstances; as she wrote, 'I am not like my dear Rev'd Mother who is never ruffled' (Letter, 21 October 1863).When Mary Clare's strength gave out toward the end of the war and she had to return early to London, Florence wrote to her (Letter, 29 April 1856):

You're going home is the greatest blow I have had yet. . . . You were far above me in fitness for the General Superintendency, both in worldly talent of administration, & far more in the spiritual qualifications which God values in a superior. My being placed over you in our unenviable reign in the East was my misfortune & not my fault. I will ask you to forgive me for everything or anything which I may unintentionally have done which can ever have given you pain – remembering only that I have always felt what I have just expressed, and that it has given me more pain to reign over you that to you to serve under me. . . . what you have done for the work no one can ever say . . .

I always felt you ought to have been the Superior and I the inferior . . . . I always felt how magnamonious your spiritual obedience in accepting such a position . . . . and how I should have failed without your help. . . . I wondered so much that you could put up with me – I felt it was no use to say to your face, either then or now, how much I admire your ways.

According to Monica Baly (1997), the widely respected British nurse historian, Mary Clare Moore was one of the greatest influences on Florence Nightingale in nursing matters.

Because of the acute need for skilled nurses at the war, the British War Office looked to Ireland for more nurses and again Sisters of Mercy offered their nursing service. It is from part of their letter sent to the British War Office that the contemporary term 'Careful Nursing' is taken. They wrote in part (Whitty to Yore, 18 October 1854)

Attendance on the sick is, as you are aware, part of our Institute; and sad experience among the poor has convinced us that, even with the advantage of medical attendance, many valuable lives are lost for want of careful nursing.

Here is the section from a copy of the letter made for their records at the time: 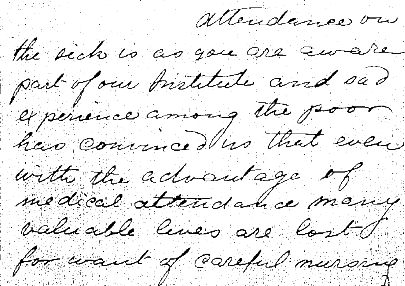 Their offer was accepted and eleven Irish sisters with nursing experience led by Mary Francis Bridgeman formed part of a second group who travelled to Scutari. Mary Francis, from Kinsale, was a kinswoman of Daniel O'Connell and had begun her nursing experience at a Limerick cholera hospital during the 1832 epidemic. By 1854, she had considerable experience caring for the sick poor. She was also known as an astute administrator and leader..

Accompanying her were Clare Keane and Mary Joseph Lynch, also from Kinsale; Paula Rice and Aloysia Hurley from Cork city; Mary Joseph Croke and Clare Lalor from Charleville; Mary Stanislaus Heyfron and Mary Aloysius Doyle from Carlow; and Agnes Whitty and Elizabeth Hersey from Dublin. All agreed willingly to serve under the nursing direction of Florence Nightingale. Around four thousand wounded and sick soldiers, a third of whom were Irish, lay in extreme distress in the Scutari hospitals with very few nurses to tend to them.

However, when they reached Constantinople they received with 'indescribable shock' a message from Florence saying that 'it was a gross mistake on the part of the war office' to send more nurses; that she 'had neither accommodation nor need for more nurses at Scutari' (Bridgeman 1854-1856, p.18). What had happened was that the War Office had, under immense public pressure to get more nurses to the thousands of sick, wounded and dying soldiers, sent this second group of nurses without informing Florence.

Although Florence was extremely annoyed at not being consulted about the need for more nurses, she sent them a letter of welcome five days later. She invited five of the sisters to work at the Scutari General hospital, although not in a nursing capacity. In light of these circumstances Mary Francis considered the group to be released from their agreement to provide nursing care under Florence. She negotiated a new agreement with the War Office for them all to be employed as nurses at the Koulali General and Barrack hospitals, a few miles from Scutari. Toward the end of the war they moved up to the General and Hut hospitals on the Crimean peninsula. Their journals, the original copies of which are held in convent archives, have been edited by Luddy (2004) and record their nursing practice at these hospitals.

It was a sad reality of the time that the relationship between Mary Francis and Florence became immersed in the web of intense cultural, political and social conflict that was prevalent during this period. It was complicated further by their individual personalities. They had different approaches to nursing practice and different administrative styles. Nonetheless, both were women of great courage and determination who loved nursing and contributed in their own particular ways to its early modern development.

Towards the end of the war Florence visited Mary Francis and her group at the Crimean hospitals to invite them back under her nursing direction, an invitation which they declined. Nonetheless, Florence requested details of their nursing system. Mary Francis's journal (Bridgeman 1854-1856) records that 'Miss N took notes on our manner of nursing which [Mary Francis] explained to her as she hoped someone might profit of it' (p. 367).

When peace was declared, the group returned unobtrusively to Ireland, exhausted from sixteen months of intense and dangerous work. The circumstances of the time did not allow for formal recognition of their contribution to the war effort. For their part they believed it would be unbecoming to broadcast about themselves and were quickly caught up again in the nursing and other needs of their local communities. Three of their journals survived the ravenous appetites of the hordes of hospital rats; those kept by Mary Francis, Mary Joseph Croke and Mary Aloysius Doyle. These were retained in convent archives and gradually became little noticed. Nonetheless, they remained revealingly available to generations of Irish nurses to come.

Section of the copy of the letter of Mary Vincent Whitty sent to the British War office from which the term 'careful nursing' was taken. Courtesy of the Archives of the Sisters of Mercy, Dublin, Ireland.