During this year the realisation has grown that Careful Nursing and nursing values are deeply interrelated. Indeed, this realisation is consistent with a distinctive feature of nursing professional practice models; that they emphasise nursing values (Hoffart & Woods 1996).

Two occurrences led to greater realisation of this relationship. One was involvement in the national nursing and midwifery values initiative in Ireland, led by the Chief Nursing Officer in the Department of Health (O'Halloran 2016). The other was thinking about values in light of the phenomenological philosophy of Edith Stein (1922/2000), which we increasingly drawn on to inform Careful Nursing philosophy and practice.

Values are defined in various ways and are known to be influenced by a range of factors (Pattison & Thomas 2010; Patterson, et al. 2016). Nursing values become a particular focus of concern when the context within which nurses' practice creates substantial challenges to their commitment to uphold their values (O'Halloran 2016). The Irish nursing and midwifery values initiative sought to strengthen and support nurses and midwives in their commitment to uphold their values. It generated widespread interest among nurses as they were asked directly, in focus groups, to identify, agree on and commit to the values that underpinned their practice. They re-affirmed their core values as compassion, care and commitment, each specified by 39 representative values.

Stein proposes a theory of motivation and value which, in simple terms, states that a value is that which motivates (Stein 1921/1989, Lebech 2015). It is based on Stein's phenomenological understanding of empathy as inherent in human experience. Stein understands empathy as 'in-feeling' which 'can occur "within" oneself or "into" another' (Sawicki 1997, p.10.). Although our experience is subjective, empathy allows our values to be viewed as objective in that not only do we experience their motivation, we can also know they exist as motivation in others.

Stein (1922/2000) views values and motivation as intrinsically interrelated. By motivation she does not mean motive or drive in the Freudian sense. Rather, she understands motivation as an ensemble of conscious urges which flow into one another and emerge from one another as we experience them in the natural flowing forth of our life-stream (Lebech 2015). Our experiences of them invite us to follow certain paths which we can choose to follow or choose to pass by.

Thus, a value is a motivating power that we feel. As we experience its motivating power we simultaneously allow it to motivate us when we accept it as ours by means of valuation, that is, by valuing it (Stein 1922/2000).

Following from Stein's theory, Careful Nursing itself, and its principles, dimensions and concepts, can be understood as values; as powers that we feel, that we allow to motivate us when we accept them as ours by means of valuation. Careful Nursing was presented as a values-guided model of nursing at the national 'Reaffirming the Values of Nursing and Midwifery' conference held earlier this month at the official Irish state guest house, Farmleigh, in the Phoenix Park, Dublin.

Thus, we can think about Careful Nursing in two ways. One is the way we usually think about it from the perspective of the natural sciences. Each element is developed as discrete and verifiable either by philosophical argument or by scientific research. In this way we are concerned with concept analyses, verification, cause and effect, and measureable relationships and outcomes; the ground for evidence based practice.

We can also think about Careful Nursing from the perspective of the humanities; as one of the arts. We have long thought of nursing as an art, which we recognise in our lived experience of practice. In this way we are concerned with the phenomenology of motivations, choices, and consequences in our practice. Using Stein's phenomenological theory of motivation and value, we can gain insight into the important role of values, particularly distinctive nursing values, in our practice. 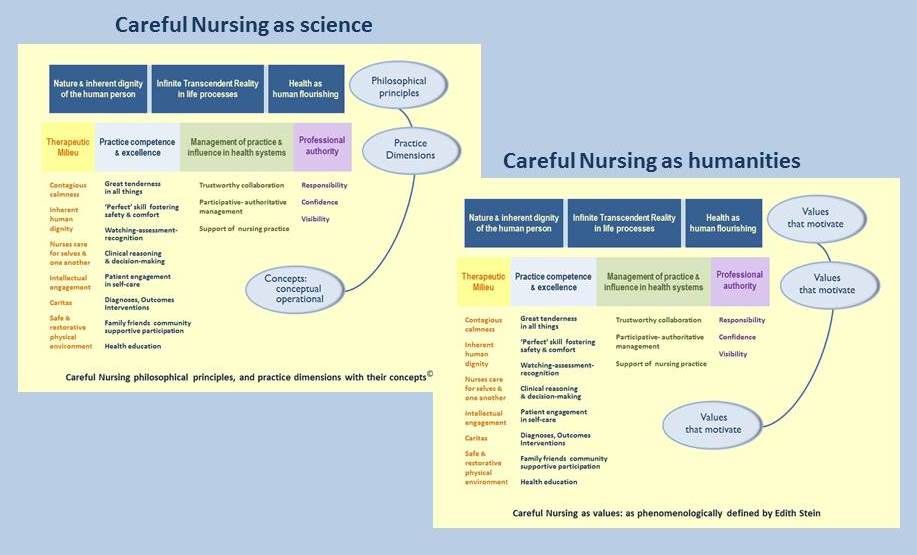 We can be aware of Careful Nursing itself and each of its elements as values; as powers we feel. We can allow them to motivate us when we accept them as ours by means of valuation. For each we can ask ourselves, is this a value for me, a power I feel motivating me in my practice? Is this a power that motivated me to become a nurse? Which of Careful Nursing's elements is a distinctively nursing value and which do we share with other groups? If a given element is a value for me, where is it in my hierarchy of values? Is this a value I feel as I practice but cannot respond to because of internal and/or external challenges?

In light of the current values-challenging context in which we practice, the last question is the most important. If the answer to this question is yes, it emphasises an urgent need to explore, describe and solve a fundamental practice dilemma. Thinking about nursing values in a new way using Stein's philosophy is only a beginning step. Much more thinking remains to be done.

O'Halloran, S. (2016) Position Paper One: Values for Nursing and Midwives in Ireland. Department of Health, Dublin.