The Careful Nursing Philosophy and Professional Practice Model (Careful Nursing) is included in a review and analysis of nursing professional practice models published last month in the Journal of Nursing Management (Slatyer et al. 2016). Thirty-eight models were identified, 34 developed in the United States and one each in Australia, Canada, Ireland and Saudi Arabia. Before considering the findings of this review let us look briefly at the background of the professional practice model and why the practice aspect of Careful Nursing is developed as this type of model.

It is 20 years since the first review of emerging professional practice models was published by Hoffart & Woods in 1996. They observed that in the early 1990s innovative nursing models were being developed by nursing departments in acute, community, and long-term care organisations in the United States. Although the models varied somewhat in their emphasis, Hoffart and Woods bought them together under the term professional practice model (PPM).

They defined a PPM as 'a system (structure, process, and values) that supports registered nurse control over the delivery of nursing care and the environment in which care is delivered' (p.354). They described it as being composed of five key, intertwined elements; values, professional relationships, a patient care delivery model, a management approach, and compensation and rewards, as listed in the Table below. Of the key elements, they identified shared professional values as being of central importance because values gave focus and coherence to the other elements. They emphasised the importance of quantitative evaluation of the effectiveness of PPMs.

Careful Nursing as a PPM

Following the content analysis of the historical data from which Careful Nursing was developed, an initial attempt was made to organise the concepts which emerged from the data into a conceptual model of nursing (Meehan 2003). However on further reflection, not only did the resulting model not meet the criteria for a conceptual model as set out by Fawcett (2005), the historical data simply did not fit with any of the structures laid out by Fawcett for nursing knowledge development. Thus, the received view of how nursing knowledge should be developed was abandoned and a fresh start made.

It was recognised that the broad assumptions about the nature of human beings, their life process, and human healing and health, which emerged from the historical data were complex and fundamentally important. Thus they were formulated as three philosophical principles which together comprised a Careful Nursing philosophy. The remaining historical data described the attitudes and activities of nursing practice as it was informed by the philosophical principles. These nursing practice concepts fell into four groups which were consistent with four of the five elements of the PPM described by Hoffart and Woods (1996), not including compensation and rewards.

This new structure of Careful Nursing was published as a philosophy and professional practice model (Meehan 2012). Following experience implementing it in hospitals and on-going discussion with a philosopher, minor revisions have bought it to its current structure.

Slatyer et al. (2016) categorise the PPM as a 'theoretical framework for nursing practice' (p. 143), that is, a basic organising structure of concepts or statements that provides direction for research (Meleis 2012). Most PPM theoretical frameworks are developed within acute care hospitals and health systems and incorporate nursing structures and processes designed to support high quality nursing practice and nurses' satisfaction with practice. PPM research is primarily aimed at evaluating their effectiveness in improving patient outcomes, with more than half demonstrating improved patient and nurse satisfaction.

A wide-ranging review of the 38 PPMs is presented and six components shared by all models were identified. These are listed, with other common components, in the Table below alongside the five key elements identified earlier by Hoffart and Woods (1996). The components identified are similar to the Hoffart and Woods key elements, particularly emphasis on shared leadership and responsibility in patient care, and nurses' control over their practice and practice environment.

A difference between the reviews concerns values. Hoffart and Woods found that earlier PPMs emphasise nursing values and human dignity. Slatyer et al. (2016) found that current PPMs emphasise core values of practice organisations and but they did not identify reference to human dignity. Taken the influence of managerialist ideology in contemporary healthcare organisations, this could be cause for concern. Another difference is that nurses' financial compensation, identified in the earlier review, is replaced in the later review with compensation as professional development. Although the data are not yet published, in Careful Nursing nurses' compensation is provisionally control over nursing practice and enhanced professional confidence.

But the reviews taken together demonstrate a significant overall achievement of PPMs. They show that their early promise of strengthening the development of professional nursing practice and demonstrating the profession's contribution to patient outcomes has become a reality accepted by the profession at-large. As Slatyer et al. (2016) observe, implementation of a PPM has become one of the requirements for achieving Magnet Recognition® (Robert & Finlayson 2015), widely regarded as the benchmark for nursing practice excellence.

Comparison of the key components of PPMs with the dimensions and concepts of the Careful Nursing PPM, shown in the Table below, confirm that Careful Nursing practice reflects that of a professional practice model. 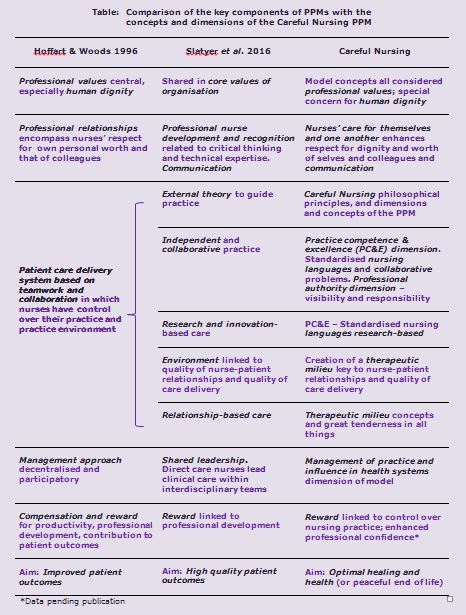 At the same time, Careful Nursing as an interrelated philosophy and practice model offers a depth and comprehensiveness that extends beyond all except one other PPM, an adaption of Carper's patterns of knowing, patterns of research, and Aristotle's intellectual virtues, developed by Bennett Jacobs (2013). In the Slatyer et al. review only these two PPMs are identified as not being specific to a particular setting. Although they are models of nursing that broadly follow a PPM structure, they are not structured for use in a particular hospital or health system. Rather, they are structured for use by nurses in any practice setting.

In keeping with the values orientation of PPMs, both models also emphasise nursing values. For example, Careful Nursing dimensions and concepts are also considered nursing values. In Careful Nursing values are understood as things that motivate nurses; they are what nurses feel in their bones. It is the lived experience of nursing values that prompt nurses to think about or to say how much they love nursing, even though it may be very challenging at times.

Careful Nursing could be thought of as a hybrid nursing PPM/conceptual model of nursing. As a PPM it is rooted in nursing practice, but historical practice which was patterned on long-standing principles of nursing as it developed in the Western world. As a PPM it gives bare priority to nursing's age-old essence; safeguarding sick, injured and vulnerable people from harm and, in relationship with them, fostering their healing, health-giving development and flourishing. It illustrates the possibility that these broad concepts could be included by nurse theorists in their development of conceptual models of nursing, along with their interpretations of the relatively recent work of Nightingale.

Perhaps as a hybrid nursing PPM/conceptual model, Careful Nursing, along with Bennett Jacobs's (2013) Innovative Professional Practice Model, could help narrow the widely lamented nursing theory-practice gap. In the meantime, we are indebted to Slatyer et al. for their timely review of professional practice models for nursing.