Thank goodness! We have standardised nursing languages for nursing patients from a nursing point of view.

The road to using standardised nursing languages has been a long one for me.

As a nursing student I found that the importance of the steps of nursing process and its use in all areas of nursing practice was stressed and emphasised innumerable times. I remember in the third year of my degree programme, during an acute surgical placement, I was required to do a case study. I selected a patient who had acute cholecystitis and had undergone a laparoscopic cholecystectomy. My initial preparations for the case study began by following an acute cholecystitis patient and then building on the content.

I was overcome by great disappointment as my efforts had been in vain. I had experienced many sleepless nights while doing the case study. I wanted to find out what had I done wrong and asked for further feedback from my lecturer. She explained to me that even though I used the nursing process I had been addressing medical problems and had failed to address nursing problems.

I thought that I had learnt my lesson!

Since that time I always tried to think of ways to make my case study more nursing oriented. I wanted to understand how to do this? What would help to better articulate my nursing approach to practice?

As I started my professional nursing practice I gained more insight into the importance of complete head-to-toe assessment for patients, using different screening and assessment tools and recognising every patient as a holistic individual. I soon realised that I could distinguish between nursing and medical problems. But I still found it difficult to define nursing problems. They were getting lost among medical problems and the problems of other disciplines. They needed some process by which they could be recognised.

It seemed that I still had a lesson to learn!

The standardised nursing languages are internationally recognised, evidenced based and allow nurses to voice their professional perspective and to continue the advancement of nursing knowledge. My involvement in implementing the Careful Nursing Philosophy and Professional Practice Model in St Vincent's University Hospital has given me a great opportunity to explore the use of 'NNN'.

Using standardised nursing languages emphasises the great importance of clinical reasoning and decision-making. They help to explore the steps of nursing process in greater detail. They focus on nurses' data collection techniques and how data are interpreted and analysed, thereby promoting critical thinking. But it is often a struggle to articulate this data from a nursing perspective.

The standardised nursing languages are a great medium to articulate and identify nursing roles and responsibilities in the care of patients. Most importantly, in Careful Nursing, patients participate in the use of the standardised languages by contributing, as is possible and appropriate, to identifying nursing diagnoses, outcomes to be achieved and the selection of interventions. The opportunity to work on designing different nursing care plans using 'NNN' has helped me to clearly identify the nursing aspects of patient care.

The beauty of using standardised nursing languages with Careful Nursing is that it stipulates patient participation in determining nursing diagnoses, outcomes and interventions. The vital focus on a detailed nursing assessment to steer the appropriate selection of nursing diagnoses is key.

In case you don't agree with me

Let me give you an example using the case study mentioned above. The patient is a 45-year old woman admitted with sharp pain radiating to her back, a feeling of nausea and vomiting, symptoms of jaundice skin, and the sclera of her eyes appears yellow. Ultrasound of her abdomen and pelvis reveals a thickened and obstructed gall bladder. She is scheduled for an emergency laparoscopic cholecystectomy.

For her pre-operative care plan the nursing diagnostic process pathway described in Diagram below was as used (adapted from presentation on standardised nursing languages by Sinead Murphy and used with permission). 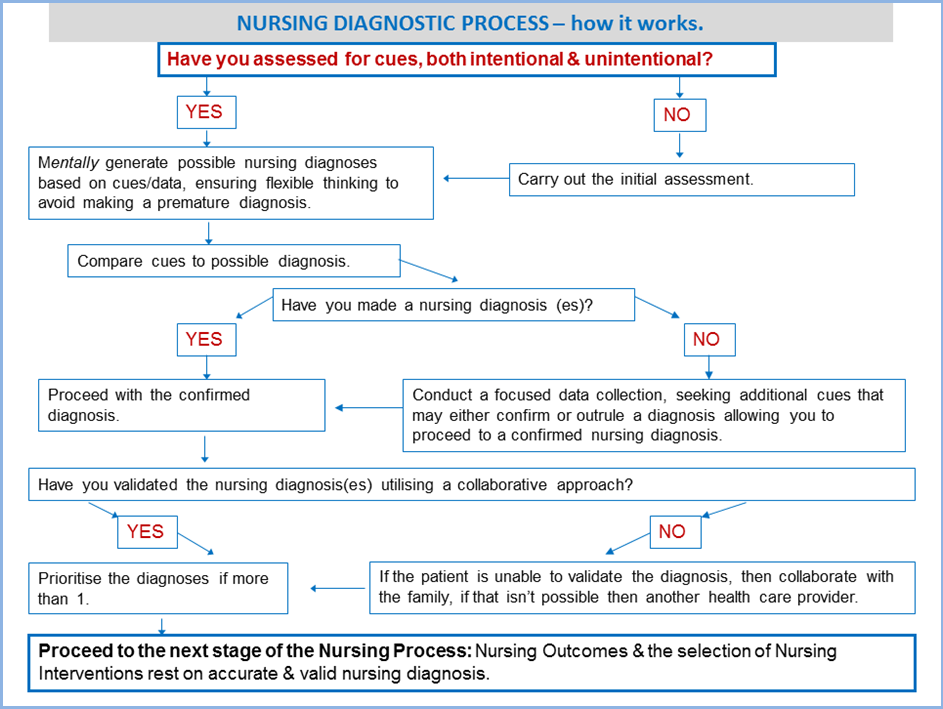 Once the nursing diagnoses are chosen, I continue following the steps of the nursing process to select the appropriate nursing outcomes and nursing interventions. I found NANDA, NOC, and NIC Linkages edited by Johnson et al (2006 ) to be a very useful reference, especially in validating the appropriate selection of outcomes and interventions according to the patient's needs. Most importantly, selected nursing outcomes are objective and can be measured on a five point Likert scale.

Some of the nursing diagnoses identified during pre-surgical and post- surgical care planning for the patient are listed in the left column of following Table. 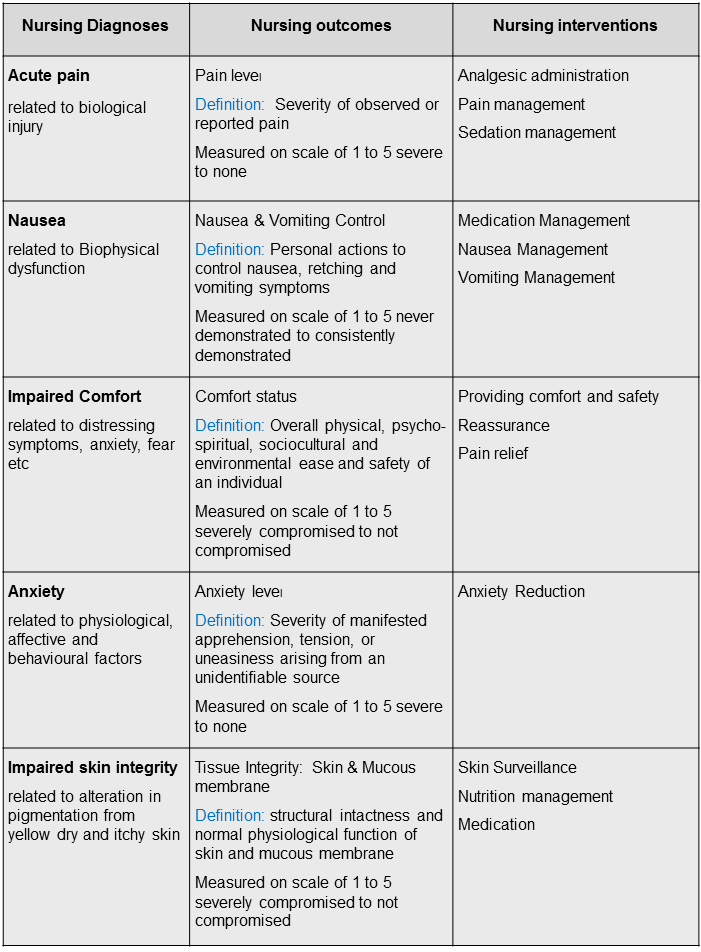 I find that the standardised nursing languages are very useful in identifying and addressing psychological, psychosocial, spiritual patient problems that are within the scope of nursing. The concepts of the Careful Nursing model such as 'perfect skill fostering safety and comfort', 'watching assessment & recognition', 'clinical reasoning & decision making', 'patient engagement in self-care', 'family friends community supportive participation' and 'health education', merge easily with the standardised languages in the patient's care plan.

Where I am now with standardised nursing languages

I am truly enjoying this journey. I find that I am learning something new each day as I continue to explore using standardised nursing languages. They also bring new opportunities for research which can further strengthen our nursing profession.