How can it be that we as professional nurses are at times failing to fulfil our social mandate to provide essential nursing care for sick, vulnerable members of our society? Why is it that people affected by our failure go to the media to get our attention? Are we seeing? Are we hearing? Or, are we losing our way?

A few weeks ago, as reported by Flaherty (2015), an 81-year old gentleman with breathing problems was admitted to a major hospital from a nursing home. In the nursing home he had received excellent care and lived a happy and reasonably active life, despite Parkinson's disease. He was "known for his sharp intellect, generous nature and his love of living life to the fullest". In the hospital he received medical care. However, lack of attentiveness to his essential nursing care bought him into the media spotlight.

One day his family came to the hospital and found him "left sitting out in public . . . 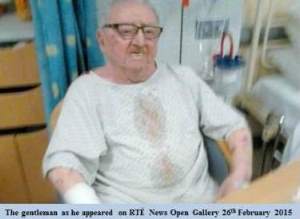 in a soiled state . . . in an incontinence pad which was left full . . . He had no dignity . . . His whole bottom half wasn't covered . . . He was treated as if he was invisible". They said that he was not washed and did not receive oral care. Although Parkinson's disease made his voluntary movement difficult, he was left to try to feed himself, with most of his food going "all down him". They found him deeply distressed and crying at being left in such a state.

His family was so distressed at finding him sitting helplessly in this condition that they took a photograph of him and made it available to the national television news (Byrne (2015). They wanted to drive home to nurses the profound importance of them having respect for the dignity of patients.

Are we seeing? Are we hearing?

These events were national news for a day – but only for a day. Many nurses saw and heard the media reports and felt professionally shamed. But no professional nursing body appears to have commented about it publically. No commentaries have appeared in the media; no letters to the editor of newspapers.

Why do some patients become invisible to us?

Unavoidably, we are influenced by our prevailing culture which views essential nursing care as doing menial tasks. Distinctive nursing responsibilities such as helping patients wash, eat, drink and attend to the personal care of their bodies are considered just so much drudgery for which no particular skill is required (Middleton 2013). Too many of us absorb this view and spread it among ourselves. Too often we use the term 'basic' to describe essential nursing care with its undertone of being at the lowest level; beneath us (Moore & Ryan 2007). We delegate it to 'care assistants' and wash our hands of responsibility for it.

Perhaps we are too concerned with our scope of practice in terms of expanding it; of making it grander? We have every sort of nurse specialist and advanced nurse practitioner, most aligned to specific health care settings or medical or surgical specialities. But as professional nurses we are all mandated to be specialists and advanced practitioners in essential nursing care, for example, watching, assessing, and recognising patients' status and needs; managing pain and distress; ensuring personal hygiene; enabling self-care; positioning; mobilising; protecting, nurturing, and always respecting human dignity.

Let us not lose our way

Let us strengthen our professional commitment, self-confidence and courage. We need to be strong in the face of many stumbling blocks; economic austerity, a nursing shortage, managerialism, cost containment and political manoeuvring. It is too easy to say "I can't do this"; "my manager won't let me do that". We must remember that we have our long-honoured nursing heritage behind us and that we have The Careful Nursing Philosophy and Professional Practice Model to inspire us and show us a pathway forward. One strength of Careful Nursing is that in its 'practice competence and excellence' dimension it draws on standardised nursing languages which emphasise nursing diagnoses, outcomes and interventions – many of which identify and clearly address essential nursing care.